A gold card carries with it a certain status. For credit card holders, it implies that they are reliable borrowers who pay their bills on time. For Texas physicians, the gold card indicates they consistently meet prior authorization requirements and that state-regulated insurance companies will not delay their patients’ care.

Under a law that took effect this month and is the first of its kind in the U.S., physicians who have a 90% prior authorization approval rate over a six-month period on certain services will be exempt—or “gold carded”—from prior authorization requirements for those services.

Prior authorization is a health plan utilization-management or cost-control process that requires physicians to get approval before a prescribed treatment, test or medical service qualifies for payment.

Gold carding is included in a set of prior authorization reform principles (PDF) put forth by the AMA and 16 other physician, patient and health care organizations. Specifically, the joint document says that “health plans should restrict utilization management programs to ‘outlier’ providers whose prescribing or ordering patterns differ significantly from their peers after adjusting for patient mix and other relevant factors.” The principles further elaborate that health plans should offer a “physician-driven, clinically based alternative to prior authorization, such as . . . ‘gold card’ . . . programs.”

Importantly, health plans also agree that prior authorization reforms should include offering programs that exempt high-performing physicians from prior authorization requirements. The AMA, along with other national provider associations and the insurer trade associations America’s Health Insurance Plans and Blue Cross and Blue Shield Association, released the Consensus Statement on Improving the Prior Authorization Process (PDF) in January 2018. In this landmark agreement, health care professional and insurer representatives agreed to “[e]ncourage the use of programs that selectively implement prior authorization requirements based on stratification of health care providers’ performance and adherence to evidence-based medicine.” 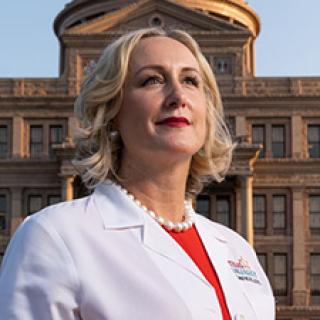 Austin oncologist Debra Patt, MD, PhD, is executive vice president for Texas Oncology, a physician group with more than 500 doctors at 210 locations in Texas and Southeast Oklahoma. And for every three Texas Oncology doctors, there’s more than one staffer spending all day, every day on the job managing prior authorizations—200 people all told.

“Prior authorization used to be an infrequent tool, and now it is a ubiquitous tool to manage utilization,” Dr. Pratt said, noting that just about every test or scan she orders, and every treatment she prescribes, is subject to prior authorization.

“Ultimately, they all get approved, so the fact that I have to spend 15 hours a week dealing with this is crazy,” added Dr. Patt, an AMA member and immediate past chair of the Texas Medical Association (TMA) Council on Legislation. She testified on behalf of the bill before the Texas legislature.

In a 2020 survey of Texas physicians, 85% of respondents said prior authorization delays access to care, 81% said it interfered with the continuity of ongoing care, and 78% said it led patients to abandon their recommended course of treatment. That mirrors the results in an AMA national survey of 1,000 physicians conducted in December.

As alarming as those figures are, Dr. Patt said that stories of patient harm caused by prior authorization delays were most compelling to Texas lawmakers. She told them of the delays her patients face and relayed the story from a physician colleague about worried parents who waited 24 hours to get approval of a generic treatment for their child’s urinary tract infection.

Efforts to fix prior auth move ahead in Congress, states

The TMA notes that while, “technically” the law went into effect Sept. 1, the rule-making stage of its implementation has not yet been completed.

The law also contains a provision that the peer-to-peer review to appeal prior authorization denials be conducted by a Texas-licensed physician in the same or similar specialty.

Learn about the AMA policy to make peer-to-peer prior authorization talks more effective.

While the scope of the new law may be limited, Dr. Patt encouraged other state medical societies to use the Texas law as a model to help build momentum for national reform.

“What we all need is better federal policy, but until states pass progressive policies to manage prior authorization, we won't have interest in developing federal policy to address the issue,” she said. “As interest increases, it's more likely that federal legislation emerges.”

Federal progress may be on the horizon, with the recent reintroduction of the Improving Seniors’ Timely Access to Care Act. The AMA supports the bill, which would require Medicare Advantage plans to implement many of the reforms outlined in the Consensus Statement, including offering gold card programs. The bill was referred to committee, and no further action has been taken to date.

The AMA has prior authorization resources to support reform, improve practice efficiency and provide data to highlight the need for change.