More than 5,000 physicians responded to a survey conducted by researchers from the AMA, the Mayo Clinic and Stanford University School of Medicine. The study found that 43.9 percent of U.S. physicians exhibited at least one symptom of burnout in 2017, compared with 54.4 percent in 2014 and 45.5 percent in 2011.

Published in Mayo Clinical Proceedings, the study, “Changes in Burnout and Satisfaction with Work-Life Integration in Physicians and the General US Working Population between 2011-2017,” also found that, in comparison, the overall prevalence of burnout among U.S. workers was 28.1 percent in 2017. This is similar to levels found in 2014 (28.4 percent) and 2011 (28.6 percent).

“The tide has not yet turned on the physician burnout crisis,” said AMA President Barbara L. McAneny, MD. “Despite improvements in the last three years, burnout levels remain much higher among physicians than other U.S. workers, a gap inflamed as the bureaucracy of modern medicine interferes with patient care and inflicts a toll on the well-being of physicians.”

The AMA continues to lead the national conversation to address issues fueling physician burnout and drive large-scale initiatives that ensure the patient-physician relationship is more valued than administrative responsibilities.

“The progress demonstrated in today’s research suggests that growing national efforts to address physician burnout are on the right track, but more work is needed to achieve meaningful change,” said Dr. McAneny. “Addressing the crisis requires continued investment from the health system in a comprehensive strategy that targets barriers to efficiently providing patients with high-quality care as the primary driver of physician burnout.”

Through innovative research, collaborations and advocacy, the AMA is focused on using technology as an asset and not a burden, and developing solutions to make physician burnout a thing of the past.

While physicians are more satisfied than they were in 2014 (40.9 percent), it remained less favorable than in 2011 when 48.7 percent of doctors stated they had enough time for their personal and family life.

However, after adjusting for age, gender, relationship status and hours worked in a week, physicians remained at an increased risk for burnout and were less likely to be satisfied with work-life integration than other working adults. The proportion of physicians screening positive for depression also saw a modest, but steady increase with 41.7 percent in 2017 and 39.8 percent in 2014.

“There is a strong economic and public health case for prioritizing a comprehensive strategy to reduce the work-induced syndrome of burnout and caregiver fatigue that is pushing some physicians out of medicine,” said Dr. McAneny. “An energized, engaged, and resilient physician workforce is essential to achieving national health goals.”

The AMA Ed Hub™—your center for personalized learning from sources you trust—offers CME on professional well-being using the STEPS Forward™ open-access platform that recommends innovative strategies that allow physicians and their staff to thrive in the new health care environment. These toolkits can help you prevent physician burnout, create the organizational foundation for joy in medicine, create a strong team culture and improve practice efficiency. 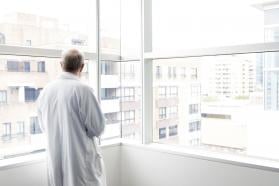 Mental health and COVID-19: How a psychiatrist tackles fear, anxiety 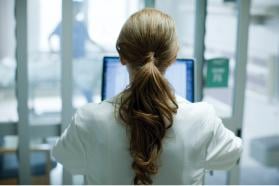 The 12 factors that drive up physician burnout