A key question of public policy is whether health insurance markets are competitive or whether insurers have market power, which can harm consumers and health care providers. A useful indicator of competition and market power is market concentration. The U.S. Department of Justice and the Federal Trade Commission examine concentration in their evaluation of proposed mergers between firms.

One of the division's most significant efforts is the annual Competition in Health Insurance study. This annually updated study is the only publication of its kind. It is based on an analysis of unique enrollment data from a single data source for health insurers in all states and metropolitan statistical areas of the U.S. The division has also conducted analyses of past and proposed mergers among health insurers.

The 2020 update to Competition in Health Insurance: A Comprehensive Study of U.S. Markets (PDF) presents 2019 data on the degree of competition in commercial health insurance markets. It is intended to help identify areas where consolidation among health insurers may cause anticompetitive harm to consumers and providers of care.

The study reports the 2 largest insurers’ market shares and the concentration levels (HHIs) for all state- and MSA-level markets in the U.S.

Key findings from the 2020 update include: 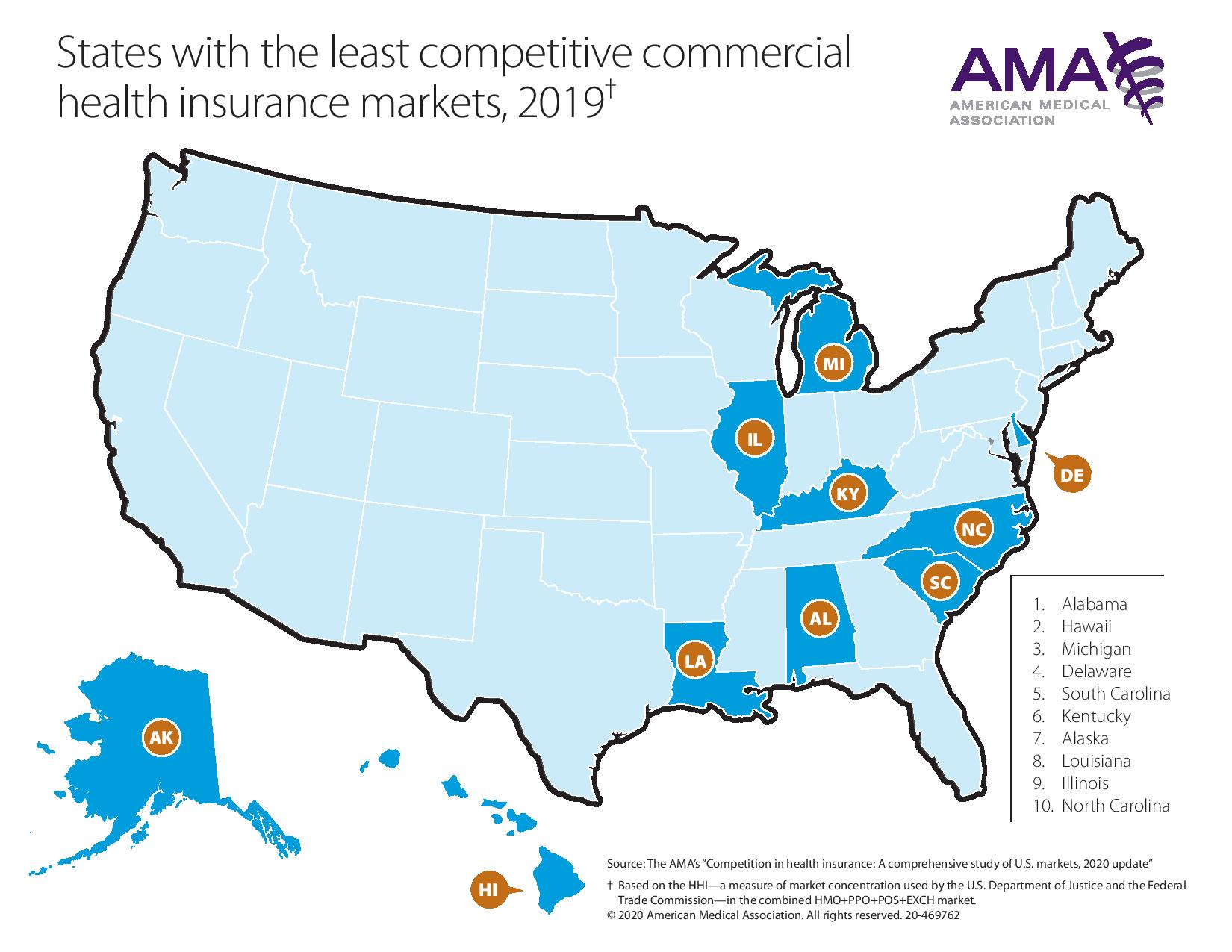 Maps from the study

Read the 2019 update to Competition in Health Insurance: A Comprehensive Study of U.S. Markets (PDF).

Read the 2018 update to Competition in Health Insurance: A Comprehensive Study of U.S. Markets (PDF).

Research on the Anthem-Cigna and Aetna-Humana mergers

Research on the Anthem-Cigna and Aetna-Humana mergers

Read more about the AMA’s successful efforts to block the Anthem-Cigna and Aetna-Humana mergers.

Research on the UnitedHealth-Sierra Health merger

Research on the UnitedHealth-Sierra Health merger

This paper (PDF) examines the association between health insurance market concentration and prices. It is a case study of the 2008 merger between UnitedHealth Group and Sierra Health Services.

It found that health plan premiums in Nevada markets increased by 13.7% after the merger. The findings suggest that the merging parties exploited the market power gained from the merger.

How 2021 E/M coding changes will reshape the physician note

CPT codes for new coronavirus vaccines: What you need to know