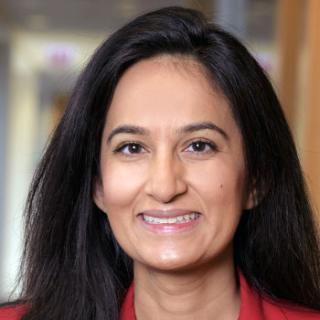 Pratistha Koirala, MD, PhD, was elected to the American Medical Association Board of Trustees in June 2021. Dr. Koirala is gynecologic surgeon at the Norwalk Community Health Center, a Federally Qualified Health Center in Connecticut, and a health equity fellow at Boston Medical Center and Danbury Hospital.

Dr. Koirala’s health care journey began in Nepal, in the foothills of the tallest mountains in the world. In pursuit of education, her family immigrated to the United States when she was a child. Her family story, of poverty and a lack of access to health care, inspired her to become a physician.

Dr. Koirala has served in multiple leadership roles in organized medicine, including on the Executive Council of the Medical Society of the State of New York (MSSNY) and, most recently, as a member of the AMA Political Action Committee Board of Directors. She has represented the AMA Medical Student Section, the AMA Resident and Fellow Section (RFS), and served on multiple reference committees for the AMA House of Delegates, and as a reference committee chair both for the AMA-RFS and for MSSNY. In addition to her work in the AMA, she is an active member of MSSNY, the Connecticut State Medical Society, the New England Delegation, and the American College of Obstetricians and Gynecologists.

Dr. Koirala first joined the AMA when she was a medical student in the Bronx. During this time, she cared for patients living in the poorest congressional district in the United States. Witnessing the impact of social determinants of health on a population and personal level, she became active in health policy, aiming to better the health and well-being of her community.

Dr. Koirala attended college at the University of Connecticut and graduated with a major in biology. She completed her MD, a Master of Science in genetics, and a PhD in molecular pharmacology at Albert Einstein College of Medicine. Her research has ranged from understanding the role of immune checkpoint inhibitors in sarcoma to the genetic basis of cardiac development.

Driven by her personal story as an immigrant, someone who has lived in poverty, as a woman, as a scientist, and as a trainee working with underserved populations, Dr. Koirala has a profound appreciation for the power and potential the AMA holds as a trusted voice in medicine and public health. It is from this unique platform that Dr. Koirala brings to life actions and advocacy that reflect the value she places on diversity in medicine and health equity.